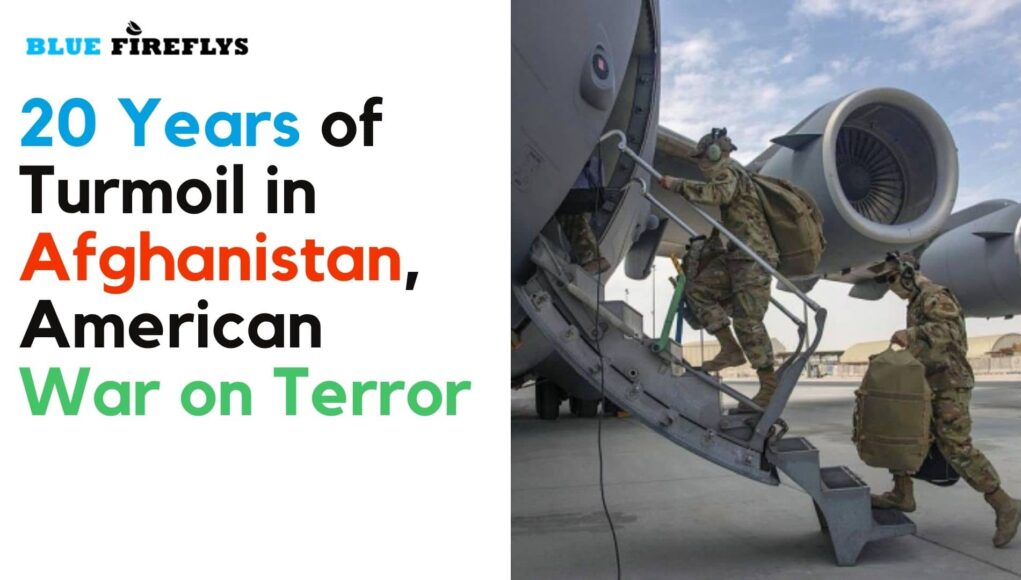 20 Years of Turmoil in Afghanistan & WoT

It’s been 20 years since America declared its War on Terror (WoT) against the perpetrators of the 9/11 attacks. The question is what America gained in this longest war? Was the American ‘Grand Strategy’ effective when they attacked a sovereign state? The way America tried to impose its narrative on others, bought peace and stability in Afghanistan, or death and destruction to the whole region? And now its exit strategy from Afghanistan raised multiple questions on its competence.

20 years ago, for taking the revenge of 2,977 people and making the world a safer place, America went 11,000 km away. American revenge may have not cost it a lot even after spending 2 trillion dollars but it deeply costed Afghans. 300,000 Afghans were killed, millions got seriously injured, many hopes and dreams were shattered.

Questioning the ‘Grand Strategy’ of American might, the airstrikes of America and its allies began in Afghanistan on 7th October 2001. A state (America) with a GDP of 10.58 Trillion dollars that time, accounting for 31.6% of the world fought with a state (Afghanistan) with a GDP of 2.46 billion US dollars, less than the 0.01% of the world. All this happened in the 21st century when after the World Wars nations formulated United Nations was to avoid the wars. America first deployed special operations for the squad who infiltrated quietly than the Marine Corps, the Army, and Airborne Division respectively.

Soon America dominates the ground in Afghanistan, within a year the old runway of Bagram was developed into a strong military fortress of the world. Which supported 140,000 operations a year and could hold 40,000 stationed soldiers. At its climax, more than 50 frontline operational bases in Afghanistan were supporting American infantries’ patrol and fights in remote areas. American fighter jets can destroy and convert the towns into debris within minutes, the Apache helicopters can tear crowds in seconds, equipped with machine guns that could fire more than 600 rounds a minute. America got an effective supply line that continuously transported food, clothing, medicines, weapons, etc.

Meanwhile, America and its allies also tried to have a political setup, but those corrupt regimes were never able to bring stability to Afghanistan. Things got worse, it became the war between the army and civilians. The worst sort of insurgency was faced by the common Afghans, in all these 20 years, more than 7,000 days and nights the firefight had never stopped.

Taliban were never been eliminated, they dispersed, and whenever they got the chance they retaliated. There seems to be no real exit strategy by America, they became war-weary and left the place, even abandoned the Afghans who worked for them. And today, on 11th September 2021, Tehreek e Taliban Afghanistan (TTA) are forming an interim Government in Afghanistan, with a much more stronghold than they have 20 years ago. During all these years of turmoil, the only industry that flourished is the weapon industry. The world has lost 855 billion US dollars in GDP, while American Military Industrial Complex gained 7.6 trillion dollars since 9/11.

The region became more unsafe than ever. Further, this WoT became the major cause of institutionalized global hatred against Muslims. The cases of islamophobia increased, and the hypocritical attitude of the west angered the Muslim world. Consequently, the ‘Clash of Civilizations’ became a reality. Life would be different for Afghans and Pakistanis if there won’t be any 9/11 but life would be definitely much different for them if America behaved sanely after 9/11.

© All Rights Reserved by Bluefireflys