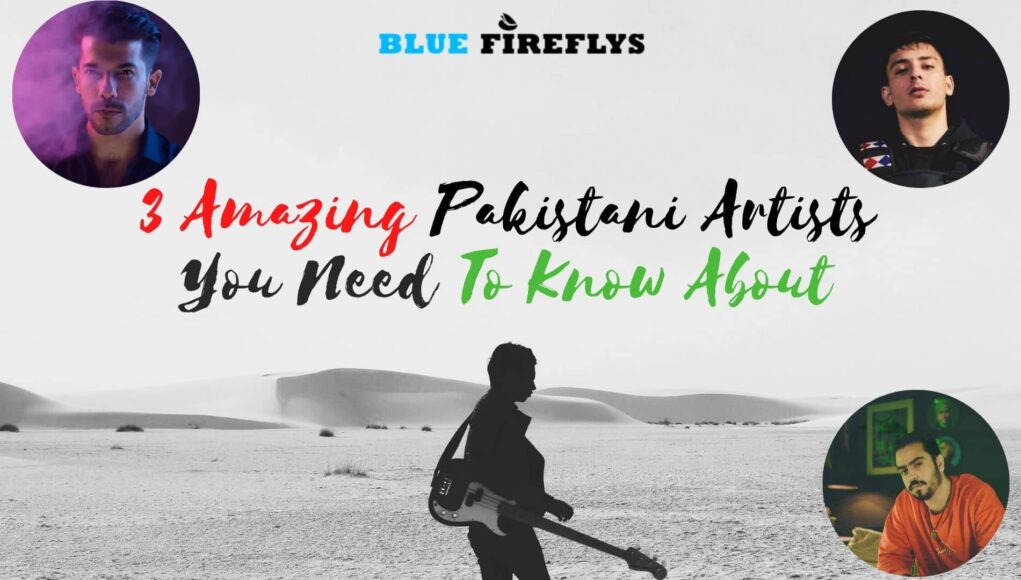 We have seen many Pakistani Artists throughout the century. Singers such as Rahat Fateh Ali Khan, Atif Aslam, Ali Zafar, Abida Parveen, Hadiqa Kiani, Nazia Hassan (and the list goes on and on) have been the pride of the nation. We have listened to their songs at some point in our lives and they still have a special place in our hearts. It is, without a doubt, true that their music was truly rich and stellar. And our young Pakistani artists are keeping up the standards with their new style, beats, and lyrics. Let’s have a look at some of them.

With so many of his songs reaching well over a million views on youtube including Khayal, Rung, and Taare, Shamoon Ismail’s music has an R&B, Punjabi Blues, and a Chill vibe to it. I am not a big fan of Punjabi songs but Shamoon Ismail is on another level. He really understands how to make the listener reach deep inside and find that one memory that keeps them alive and keeps them up at night. His music makes you nostalgic for a time you didn’t even know you missed.

Like some old-time Pakistani artists, Shamoon Ismail sings some of his songs in fluent Punjabi. His one song, in particular, Marijuana, makes you feel as if you are driving on an empty highway in the middle of a cold night, leaving behind everything, starting anew. Very specific. I know. Also very rare for a song to bring out very specific feelings and memories.

Only one thing wrong with this song. It ends. I need an hour-long loop of this.

Currently studying to be a doctor and recently married, Hasam Raheem has released some songs in the past that still remain at the top of my playlist. These songs are Aisay Kaisay, JOONA and Aarzu. This guy seriously gives me Joji vibes. He is a perfect example of the new style that’s coming around, an avenue that many Pakistani artists rocked. The style that has a Chill R&B and late 90’s hint to it.

In his song, Aisay Kaisay, my favorite, he sings:

The song is so calm and in the video, Hasan can be seen just grooving in a street in a pink hoodie. He sings with a heavy accent that is calm and adds to the groove of the song.

I am really looking forward to his new release. What about you guys?

Maanu is overall just an amazing artist, singer, composer. Everything from his lyrics to his music videos is pure gold. Some of his songs such as Dou Pal, Risky, and Khwaab are examples of his genius. He is one of the best Pakistani artists.

In his Melancholic, he is at a party, surrounded by people who are talking to each other, laughing with one another, and moving on to another place, all the while Maanu stays still in his place almost as if he is invisible. This scene describes what it’s like to be alone even when you are surrounded by people. He sings:

He manages to keep a little bit of that traditional Pakistani music style to his songs while simultaneously introducing new and fresh sounds to them.

Talk about Pakistani artists being overlooked in their own country

Poor Rich Boy really deserve the nation’s attention for all their work. Everything about them from the lyrical structure to the variety of music they produce is absolute gold. In their latest song, Yaqeen, they say talk about the production of the song,

They share the experience of writing a song and being trapped in the vicious cycle of uncertainty.

Everyone has a different interpretation of the song. In my interpretation, they talk about our connection with God. In the following verse

The meaning could go two different ways. A hard life goal is being talked about, for which the singer is staying awake at night to achieve. Or it could be to establish a strong connection with God, they are praying at night. Poor Rich Boy is the Pakistani artist we didn’t know we needed.

These are some of the many amazing artists out there who are emerging into the new decade with their own style and touch. Staying true to themselves, we wish these artists the best of luck in their future endeavors.

What are some of your favorite artists?