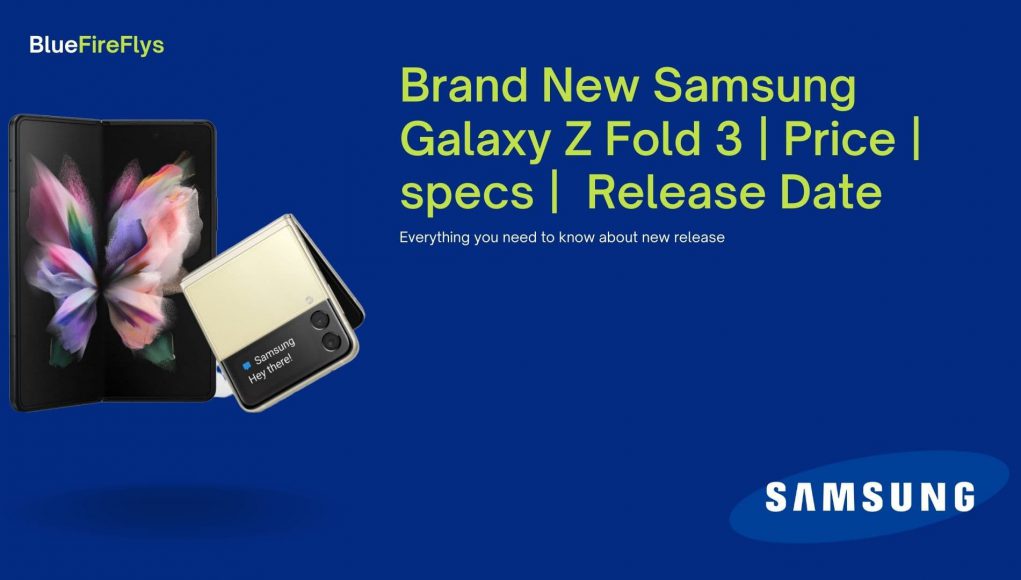 There is no denying fact that Samsung smartphones are the best android phones to ever exist. Their display to battery everything so far has proved to be the most durable in every model of their phones. Samsung has yet again stepped up their game by launching the brand new foldable phones; Samsung Galaxy Z Fold 3 5G and Samsung Galaxy Z Flip 3.

In this article, we shall tell you everything about Samsung Galaxy Z Fold 3 5G. So get ready to unfold the hidden recherché of this masterpiece.

First up looking at the phone, it gives out a very exotic appearance. Its folding ability outstands the overall look of the phone. It is itself portraying a drastic aura of the tech. We shall talk a lot about its fold/unfold feature because that’s what makes the most difference.

With its balanced symmetrical designs through flex mode; it stands up, stands out, folds, and unfolds. This feature takes your gaming and Netflix experience on the smartphone to the next level.

The phone is sleek slim with big screens making it a very handy and pocket-friendly phone. It has a premium 6.2-inch screen with the classic one-handed hold when folded. While unfolded, it possesses a massive view from inside which is a game-changer.

It is available in 3 gothic colors; Phantom Black, Phantom Green, and Phantom Silver.

It has a 7.6-inch Infinity Flex Display. The most unique feature of this phone is that when you unfold the phone, you would get a massive display that would not have a front camera on the screen like regular phones. Don’t get me wrong, it has a front camera. But when you unfold the phone; exposing a massive unique display screen, it hides the camera punch hole, leaving out just a screen for viewing the games or movies. Without holes for cameras, the full-screen appearance would be massive. It has a 12Hz Display and a 5nm processor.

It has an Armor Aluminum frame and is 10% more durable to secure the interior parts of the hinge-like suit of armor.13.

It can also get through the drop of up to 2M and it is more than triple times scratch resistance. That is because of its Corning® Gorilla® Glass Vitus™ display.

Its multi-camera system changes the whole outlook. Here’s what it is;

One of my most favorite things about this phone and specifically about the camera feature is that after capturing a photo you do not need to go to a gallery to view it. You can capture and view it at the time on the second screen. You can view 3 photos at the same time. Isn’t that exciting!

It has a dual battery system, which ultimately means more battery life. It has 4400mAh (typical) battery power for all-day battery life. You can also boost up with 25W Fast Charging or Fast Wireless Charging.

Samsung Galaxy Z fold 3 has 256GB storage. That is huge. You can save all your photos, videos, and files, without having to worry about storage space. You can also backup data through One Drive. It shall remain secure in this way.

The phone’s 5nm Processor is powered by upgraded GPU, CPU, and NPU. It has 12GB RAM which speeds up every activity which performs on your phone.

Overall the general security of the phone is really good. It has all those features of lock pin code, fingerprint lock, and face screening.

It has an eSIM built-in and another separate SIM card slot where you can put the SIM of your choice to be connected to the world.

From apps to connectivity everything can be customized through settings. You can also set the home screen, lock screen, and main screen wallpapers of your choice. It has also a cool feature of setting your apps in the sidebar. That can be done easily. Screen layout settings can be customized.

Samsung Galaxy Z fold 3 has up to 5g connectivity you can connect 5G of the internet with it.

With Dolby Atmos and stereo speakers, the sound system of the phone is also on another level.

It comes with Galaxy Buds2 Earphones and Wireless Charger Duo. Both of them are extraordinarily amazing and equipped with their own unique best features.

More screen = more display of every app. This would make the use of every app even more exciting. In settings, you can adjust the screen layout of every app; can customize it according to your desire.

Apart from movies and games, you can also write with the S Pen Fold. This phone sets apart your work and call system and works as a duo. With a light weighted and handy device, you can enjoy both, calling; acting as phone and screen time; acting as the laptop. What can be better than this!

The phone gives you the ability to multi-tasking at an exceptional level, saving your time. You can open 3 apps on the screen at once. And through pop-ups, two more apps can be opened. That means a total of 5 apps can be used at once on this phone. This enables the users an opportunity of smartly working.

As we aforementioned, through this phone gaming experience changes at a whole new level. It provides a bigger screen, an amazing display, with the best sound system and more speed. This altogether improves your gaming experience and turnouts; woohoo who is winning more games?!!

Samsung Galaxy Z fold 3 is water-resistant. The all-in-one Samsung galaxy z fold 3 is IPX8 certified. This certification clearly made it survive in water for 30 minutes in the depth of 1.5 meters.

It is perhaps one of the strongest phones. You can fold and unfold as many times as you want and it won’t have any impact on the display or structure of the phone. It comes inbuilt with lots of apps, and lots of apps can be downloaded through the Google play store.

A lot of things may differ and vary depending upon the country and region. For example, color availability may differ from country to country. 5G connectivity may vary depending upon the country and carrier. Samsung might change a few things in the future phone or current. Expect some minor changes. Updates might also change just a few minor things. Overall features, display, camera, and other things would remain as mentioned.

The brand new Samsung Galaxy Z fold 3 is expected to release in the last week of August. Samsung always care for their users. The quality is throughout spotless and this release will surprise the users for sure.

You may like: 20 Easy and Real Ways to Earn Money Online

Freelancers in Pakistan can Receive Funds in JazzCash. Know How!!!