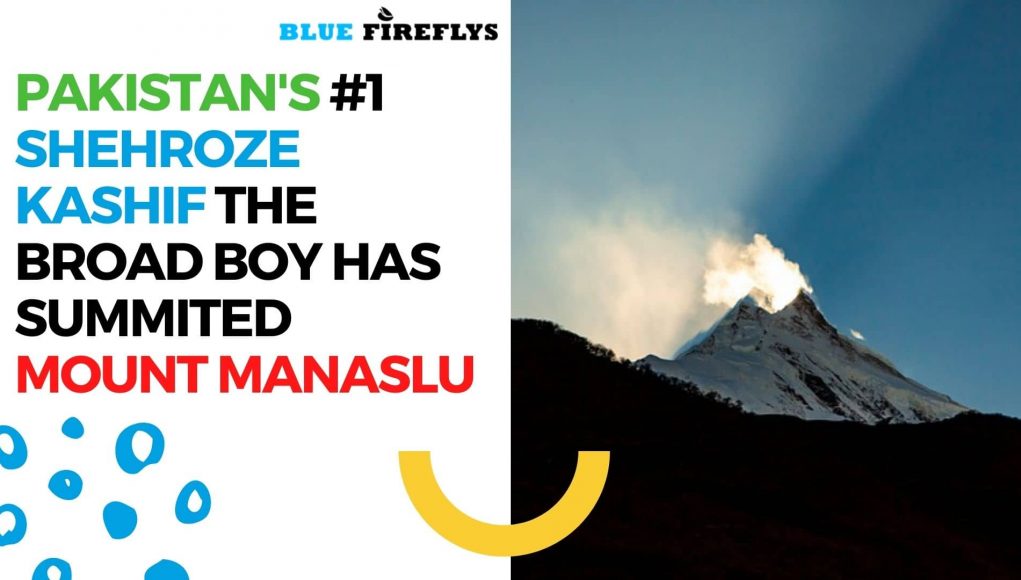 The youngest Pakistani Climber Shehroze Kashif The broad Boy has summited Mount Manaslu today on 25th September 2021 Saturday at 5:40 am PTM. Read below for full details.

Mount Manaslu is at the height of 8163m and is located in Nepal. The name of the mountain means  “mountain of the spirit”. It is one of the 8th highest mountains in the world.

Earlier this year Shehroze Kashif became the youngest mountaineer of Pakistan to summit both Mount Everest and K2. He summited the world’s highest mountain Mount Everest 8849m on 11th May 2021 at 5:02 am PTM. He became the youngest Pakistani to stand on the top of the world.  Later in the same ongoing year on 27th July 2021, he summited the world’s 2nd highest and most dangerous mountain of the world k2 8611m.

During this k2 summit, he also met Sajid Ali Sadpara who is the son of late mountaineer legend Muhammad Ali Sadpara. Sajid went all the way to search and rest the body of his father. Later Sajid also summited K2 again and at the summit, he met Shehroz Kashif.

Shehroze Kashif The broad Boy has summited Mount Manaslu. Shehroze at his earlier summits made headlines and received a lot of appreciation from the world and especially from Pakistan. he along with other heroes were invited to meet the Chief Minister of Punjab who awarded Shehroz with one million Pakistani Rupees. He was then invited to various programs and people appreciated The Broad Boy’s success.

During the show with geo tv at “aik din geo k sath”, Shehroze’s father told the media that during his son’s Mount Everest Expedition, they spent around RS10000000 with ten million.

After the summit of Mount Everest, he was made the youth ambassador of Punjab, Pakistan by Sports Board Punjab.

Shehroze with the rest of just one month again started his next target which was Mount Manaslu at the height of 8163m, located in Nepal. Shehroze management team updated his fans about his every move on the Instagram account.

Finally 5 hours ago, Shehroze Kashif The broad Boy has summited Mount Manaslu on 25th September 2021 at 5:40 a.m. PST. He raised the green flag at the top of the mountain. This is Kashif’s fourth 8000er + summit.

The news was given by the management of Shehroz Kashif on his Instagram account. He has not reached the base camp yet.

He kept on sharing his journey with his fans and asked them to support and pray for him. As he has not reached base camp yet, he still requires prayers for reaching down safely.

You may like: HP Free Courses with Free Certificates

Shehroze Kahif has summited three mountains in 1 year with a few months breaks in between. His determination and courage are unreal. He is truly a legend at such a young age. At only 19 years of age, he has already summited the 3 highest mountains which is a huge success. He once again, made Pakistan proud by raising the green flag at the 8th highest mountain in the world.

Shehroze Kashif The broad Boy has summited Mount Manaslu. We congratulate Shehroze Kashif, his family, and Pakistan for this huge success. We will him the best of luck in the future and pray that he reaches the base camp and is back at home safely.

The first case of the new omicron covid-19 variant was confirmed...