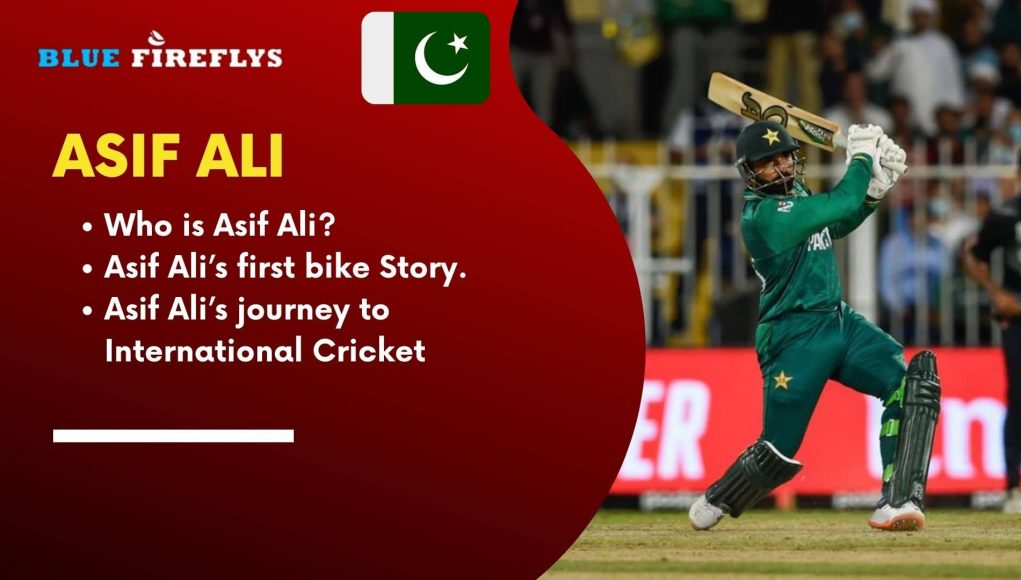 Who is Asif Ali?

Asif Ali is a right-hand batsman playing for Pakistan. He made his debut in ODIs back in 2018 against Zimbabwe. In T20I he played his first game against West Indies in the same year 2018 in Karachi. He is known for his blistering performances and known for hitting long sixes.

Asif Ali has played spectacular innings recently against New Zeeland and Afghanistan during T20I World Cup 2021. Before these two innings, Asif Ali was not so famous but with these two innings, he made the whole nation proud. After the retirement of Shahid Khan Afridi, the Pakistani team was lacking behind in lower order. Nobody was there to fulfil the gap of Shahid Afridi and play his part as the finisher.

He made it possible and recalled the memories of Shahid Afridi. Afridi was also in-stadium during Pak vs Afg match. He said that Asif Ali has played better cricket than me. There is no question about the credibility of Asif Ali. He can destroy any team within a single over. He has the power of hitting six right from the first ball.

Nobody can reach the highest level of achievement without hardship. His journey to become the well-known finisher of the World is a bit interesting. In an interview, he told the journey of the first motorbike. He said “I had the craze of Honda 125 Bike. Received the first check of runner up worth 55,000 and his salary was only 5,000 at that time. I was worried about this huge amount that I received and slept with keeping the check inside my pocket.

Then I bought my first used Honda 125 bike in black colour with those 50,000. I was selected for another tournament and went for a match. When I came back home saw the old Yamaha Bike wasn’t home. Asked my elder brother

During that interview he told the whole story of how he got selected. He said “Then I got selected for the Sui Gas team for an ODI tournament. When I came back from that tournament my manager asked me that where I have been for a whole month. I proudly told him that I got selected for a domestic level SNGPL team. Where World-class players “Misbah, Hafeez” plays. But he replied that we got nothing to do with these. This is the private sector and we can’t afford our employees being absent for a whole month. The manager told me that I have to choose whether to play cricket or continue my job.

I told him that I need 1 day time. Thinking about the future, realized that I got selected for SNGPL because there was some talent in me. My heart kept saying that I should play cricket. The next day I told the manager if they can flex my job timings and I can do overtime as well. But he refuses it. Then I quit the job.

That time was very intense and hard for me. Played tennis ball cricket and started earning 1000 to 1500 from matches. But the fun part wasn’t there. I wanted to do something worth remembering. Then I met Asad Bhai from Sialkot during a match. I played there and made 2 fifties.

After the match, he told me that you play really well and asked me how much I get paid for these tap ball matches.  I told him that round about 50,000 to 60,000. Then he told me that I get paid for 800,000 to 900,000 in only one season (3-4 months). Then I realized that I can also do this. Realized that I left my job for hardball cricket and ended up playing tape ball cricket. I left tap ball cricket and stopped playing for a while.  At this particular time, I had no money even for my own expenses.

Then I played a match in Faisalabad cricket club. Where top players of Faisalabad were playing. I played the final match there of 20 overs. I and Salman Bhai opened the batting. The total was 132. Salman Bhai scored only 9 runs and the rest of the runs were scored by me. Moreover, we have done this within 10 overs of the game.

Later Ejaz Bhai told Misbah Bhai that give this guy a chance in a match. At that time I was afraid of spinners. But Ejaz Bhai convinced Misbah Bhai and I played match, scored 100 in my debut match. From that day till now Misbah bhai always picks me in his team. This is all happened due to Misbah Bhai and I want to thank my Allah as well”.

God helps those who help themselves. It is indeed true and we have seen this happening in Asif Ali’s story. He started from scratch and now he is a world-class power-hitting batsman. To achieve something big you have to sacrifice your comfort. It is not that hard to do something worth remembering.

All you need is willpower and the belief that you can do it. Knowing your abilities and polishing them can take you from earth to sky. Know your talent, ask yourself that you can do it and start taking baby steps towards your goal. Life is too short to live. So start it right after reading this and move forward just like Asif Ali did. You can be another Asif Ali in future.